The ship clock strikes twelve but it’s not too well
I’m almost warm with a tepid pillow to console
me as I lay here thinking of what I once held dear:
our vows and words before the jabs and wounds.
The night is solemn dark and in the silence beats
this star-stuck heart; I should feel good that’s fair

to say, though yet not cured from the flowing fair-
ness of your hair, your scent I used to know too well
before bereft of warmth you left this broken beat.
In knells of absence; not even silence can console
my weight of broken bones, my burning wounds
why did adventures cease so soon. Oh dear

do you still remember lustrous worlds, how dear
it was to touch my skin? to do it straight and fair
and how you had me tightly wrapped and wound;
when I lay tamed in lust and longing right before the well
was filled, before we rested sated, and consoled;
before we turned the ship to somber drum-beats

Through wars we slept — arm-wrapped on the heartbeat
lullabies; and you, you whispered to me: “you are dear
to me, my fearless lover” and you kissed, consoled
me into cotton candy dreams; our living soft and fair
in dappled sheen and I believed that all was well.
Before your tongue had sliced these open wounds.

Do you still recall how our star-ship went and wound
through parsecs, galaxies of light to gentle beats.
We sailed on light beams; existed all too well
among familiar stars where fears were few and dear
when somewhere on a comet’s tail there was a fair
for weary travelers like us to dance enjoy, consoled

from homesickness, reprogram our ship’s console
repairing star-sails, drink to forget our wounds.
After travelling together how was it even fair
when you decided it was time to split? “I’m beat”
you said, “From now let’s just be friends my dear”
You left me for that alien djinn but wished me well.

The air is bright and fair the lights, A clock beats
but, no message on my console blinks to heal the wounds;
without you dearest ghost, nothing’s ever really well. 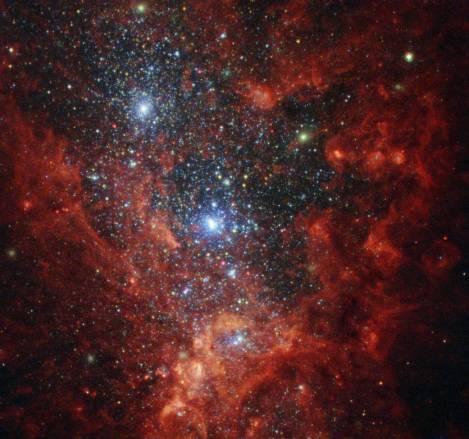 This NASA/ESA Hubble Space Telescope image reveals the iridescent interior of one of the most active galaxies in our local neighbourhood — NGC 1569, a small galaxy located about eleven million light-years away in the constellation of Camelopardalis (The Giraffe). This galaxy is currently a hotbed of vigorous star formation. NGC 1569 is a starburst galaxy, meaning that — as the name suggests — it is bursting at the seams with stars, and is currently producing them at a rate far higher than that observed in most other galaxies. For almost 100 million years, NGC 1569 has pumped out stars over 100 times faster than the Milky Way! As a result, this glittering galaxy is home to super star clusters, three of which are visible in this image — one of the two bright clusters is actually  the superposition of two massive clusters. Each containing more than a million stars, these brilliant blue clusters reside within a large cavity of gas carved out by multiple supernovae, the energetic remnants of massive stars. In 2008, Hubble observed the galaxy’s cluttered core and sparsely populated outer fringes. By pinpointing individual red giant stars, Hubble’s Advanced Camera for Surveys enabled astronomers to calculate a new — and much more precise — estimate for NGC 1569’s distance. This revealed that the galaxy is actually one and a half times further away than previously thought, and a member of the IC 342 galaxy group. Astronomers suspect that the IC 342 cosmic congregation is responsible for the star-forming frenzy observed in NGC 1569. Gravitational interactions between this galactic group are believed to be compressing the gas within NGC 1569. As it is compressed, the gas collapses, heats up and forms new stars.

Today I link an old sestina to dVerse OLN that is substantially rewritten. A love-story among starships and galaxies is what it is. Also linking up to the sestina prompt
—-
September 5, 2019

24 responses to “Left for a djinn” 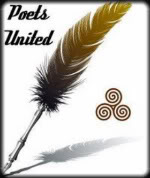