The previous day we had hardly left the cabin. Ceaselessly the rain had beaten roof and windows, clouds had licked the soil while gusts of wind had shaken walls and doors. When morning came the rain had ceased, but rivulets had grown to rivers. The sound of rushing water filled the valley, and on the map we sought a path with bridges. cause in the mountains, any well prepared plan is just an option.

During the day we had to change plans many times. One bridge was gone since long, another led us only halfway, and we could not ford the mountain streams we wanted. When finally at night we pitched our tent we had learned that also waiting can replace a bridge. The morning after we could cross the streams that were unpassable the previous evening. Many plans were changed that day but afterwards we remember more how water can be bridged with patience. 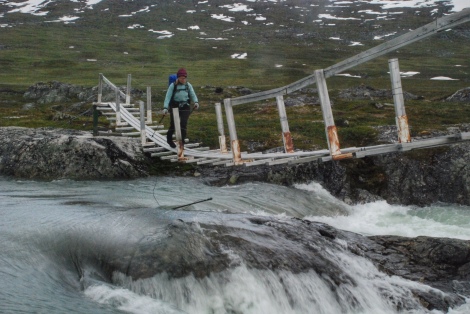 Crossing a bridge in Norwegian Mountains

Today Grace inspires us to write haibun about bridges at dVerse. Join us at 3PM EST.
—
October 31, 2016

25 responses to “Bridging with patience”

Proverbs 31:25 She is clothed with strength and dignity and she laughs without fear of the future.