She always melted into symbios
like dying snow falling softly

a background flower – wallflower
forgotten even before you’ve met

her hair was grey like a trailerpark
backyard in early March

She had a voice that sang
in harmony with swaying canopies
devoid of greenery.

She was so easily ignored
as your eyes were always fixed
on the rutted path
that leads away.

Her gaze was alway wandering
into remote waterlogged marshes
And her hands were like dying birds
forgotten by its kin.

Her dresses were like November fog.
with a smell of composted leaves

The day she was to leave
she wrote a letter to the wind,
scribbled in a hairline filigree
never to be read

She disapeared into the mist.
Her footprints in the sand
were faint and shallow
and the wind took them away. 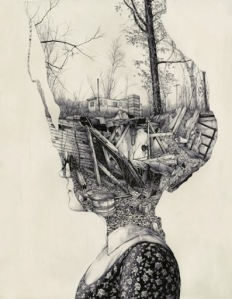 Mary wants us to write about invisible.. by a coincidence the picture for the Visdare prompt was a perfect fit. Hmm and I think I might have included a little of Brians character prompt as well.

Proverbs 31:25 She is clothed with strength and dignity and she laughs without fear of the future.